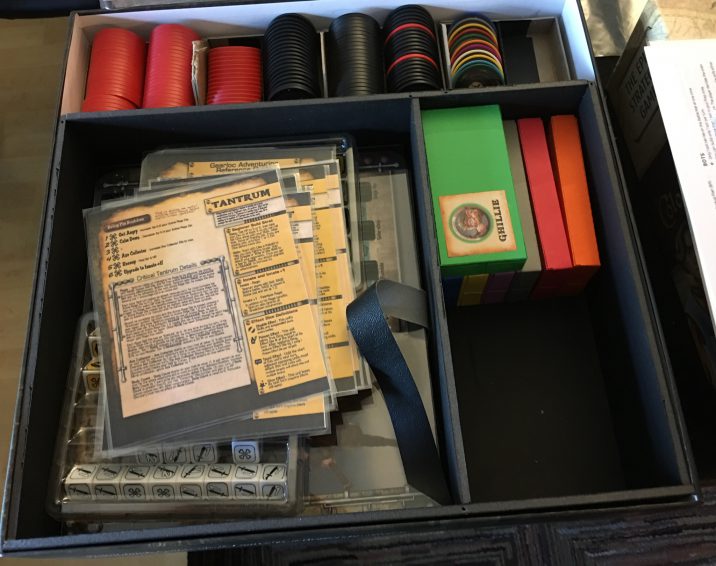 With the Kickstarter for Too Many Bones: Undertow well funded and well into the stretch goal pool, it was time to become serious about storage space for my existing Too Many Bones and expansions.

As you may have seen, I’ve already solved the space issue with each Gearloc’s dice set (Too Many Bones. Too Little Space.) — now for sale on the BGG Marketplace! (shameless plug). But I also wanted to find a way to not only store the TMB materials, but fit the Undertow components as well. To that end I decided to (gasp!) chunk the trays designed by Chip Theory Games and create my own insert to hold it all (hopefully!)

First step in any insert is of course the base or floor. You CAN just do walls and use the box bottom itself, but that results in a flimsy construction. Sure you lose 5mm of height in the box, but the stability it worth the price. The box is square at 358mm, so I cut the floor from a single piece of foam core (black looks better than white). Another tip is to always measure in millimeters. It’s easier to be more accurate and you don’t have to worry about fractions of inches. This left about 81mm of clearance to the top of the box bottom, so I cut four strips at 81x358mm and assembled the walls (two of which would need to be trimmed another 10mm or so where they butt up to the two other walls). I secure these with white glue and dressmaker’s pins (SHARP!). Some like to remove them when the glue sets, but I always leave them in. They are cheap enough to buy and they act like rebar to help the structural integrity.

After a dry fit in the box, it was time to start divvying up the space. Largest need of course would be the area to hold the battle mat, Gearloc mats, reference sheets, and rulebook. I laid these down in the new box and marked when walls should go to define that space. With the foam core eating up 5mm each wall, I had to get as close as I could to leave space in the other areas.

As I would no longer be using the trays to hold Gearloc dice, I repurposed two of those to hold the other dice in the game. I put the Attack and Defense dice in one and the rest in the other. Since the lids for those double as dice holders as well, I could still put Gearloc dice in the lids during gameplay. However, the remaining areas were not going to be large enough to hold those, so they would need to sit atop the stack of mats and reference cards in the main section.

My dice boxes easily fit into the area to the right of the main section. In fact, I can easily fit 14(!) of them in that section. With Undertow bringing the count to 10, there is still room for either four more or other materials.

I subdivided the back section into a small compartment to hold cards and a longer section for all the chips. Unfortunately that idea did not pan out. After creating a bottom layer for extra chips, the plan was a removable top layer to hold six stacks of chips. That layer would double as an on-table chip tray. But after getting the first layer completely built and installed (without glue at least), it became evident a second layer of chips would not fit heightwise!

So another solution would need to be found. So I slept on it. And then I brought a knife to a foam fight!

I determined how much space I would need for a single layer of chips to span the whole box (eight stacks) and the cut down the back section to accommodate it. This left me a 30mm bottom layer (just perfect to still hold all the cards). Now I just had to construct the chip holders (again).

I’d originally planned to make two four-stack chip trays from foamcore that would nestle into the open slot. However, I decided that it might work better to use 2mm chipboard and give me a little more space. Also these might prove a little more sturdy if folded vs. pinned and glued since the chips are so weighty. So I designed and cut a template (purple below) and traced to chipboard which I cut by hand. I scored the fold lines and started to assemble. After the first was complete I realized that they would work better as four two-stack holders as the weight distributed better. Also the chipboard doesn’t fold “neatly” even when scored, so the non-scored side frays just a bit. For the chip areas it was on the backside, so no biggie but for the wall between the two trays it got a bit ugly. So I cut the template in two and made two separate trays and surgically separated the first one. For each I made a sturdy cardstock divider to separate the two rows as well.

The end result was four trays that sit in the back section and hold about 25 chips in each, giving a total capacity of 200 chips. These can be lifted out and used on the table as needed.

So now to bring it all together. I added a “lifter” into the bottom of the main section to help, well, lift the items out of the depths and make them easier to grab. This was simply a piece of vinyl-leather material I glued down to the bottom (just on about the last three inches or so). The mats, etc. sit on top of this and then by pulling on the lifter, it raises them up slightly.

As I mentioned the Gearloc dice boxes fit into the right section, the cards in the back and the four chip trays on top of that.

But there was one thing left. The base game comes with clear cover to sit across the bottom tray. This sports the CTG name and has a finger hole for easy lifting. I decided to take that cover and trim it down so it would fit atop the books etc. in my main section. Now it can provide an extra layer of protection for the mats with the clear dice trays sitting on top of them.

In all I’m pretty happy with how it all turned out. The chipboard might have been able to be a little thinner, but it would not have given me an extra row of chips, so it is what it is. I have some extra space in the chip trays, but may still have to get creative when Undertow is released. The Tyrant, Gearloc, and Lane chips could easily be stored in separate bags under the chips or in the Gearloc section. This would leave room for the new baddie chips to come. There should be plenty of room for the three new mats, though I suppose I won’t be able to fit 14 there should the need arise. But for now with the known coming content, I think this offers a workable solution to keep everything in a single box. I hate tossing the nice trays from CTG, but that’s how the bone breaks, I suppose.

BONUS! The foam from the base game that contained the dice trays can be reused to cut stoppers for the chip trays (to keep them from sliding around).

1 thought on “Make Room for Undertow!”