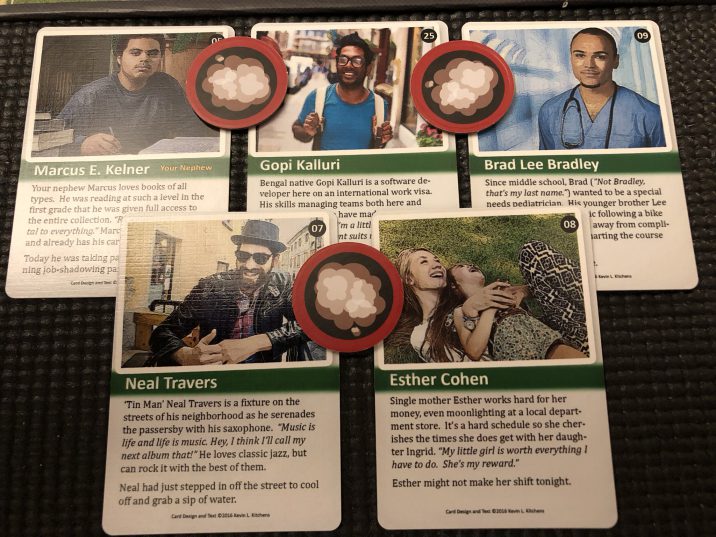 The Soloville Fire Department responded quickly to the call in the 900 block of Roane Avenue, but by the time they arrived, the flames were quite intense. According to sources a sterno can on the buffet line dislodged and set a tablecloth ablaze and the fire spread from there. As the conflagration increased in intensity, the building collapsed, immediately killing two Soloville’s veteran first responders.

Fire Captain Jose Remiriz and FPS George E. Winters perished in the collapse. The third firefighter working the blaze had just exited the building carrying the fifth rescued guest to a waiting ambulance. The rescuer’s name has not yet been released.

In addition to Mrs. Noblestein, the other victims were Tash’a Mitchell and Paloma Vazquez. Mitchell, 29, was a designer of board games, including the most recent game of the year “Roll, Draw, Shuffle, and Cut”. Mrs. Vazquez, 43, worked at a nearby church, using her sewing skills to make blankets for the community.

The loss of these souls and their contributions to Soloville cannot be understated.

As mentioned, five persons attending the party were brought to safety by rescuers. These were:

As the Mayor is taking time to deal with her direct personal loss in this tragedy, Assistant Mayor Ralph Waldeux issued this statement.

“We thank you for your prayers at this time for the victims of tonight’s fire, their families, and for the recovery of the survivors. As more information develops into the cause of this fire and its aftermath, we will let you know. Until then, no further comment.”

It was also the first time I played using my own designed “Persons in Peril” deck for identifying the victims and rescued (details: The Perils of Penelope Pitstop and other Persons). I’ve used it before for Hostage Negotiator, but reworked it for use with Flash Point.

How I used it is as follows. I used blue cubes on the board for POI markers and then when “revealed” drew a real POI marker from a draw cup. Then if it was not a false alarm, when the victim was rescued or lost, I would draw a card from the Persons in Peril deck to see who they were. If they were rescued, I put them in a discard pile as normal. If they perished, I added them to the discard pile rotated 180 degrees. The POI marker went on the board as normal to keep up with the win/lose condition counts. The male/female/age/race, etc. on the POI counter had no bearing on the deck draw… each POI just represented a “human” (or dog/cat) victim. Special POI markers from the Tragic Events expansion were used if necessary by Event card.

Definitely made for a more immersive experience, IMO.