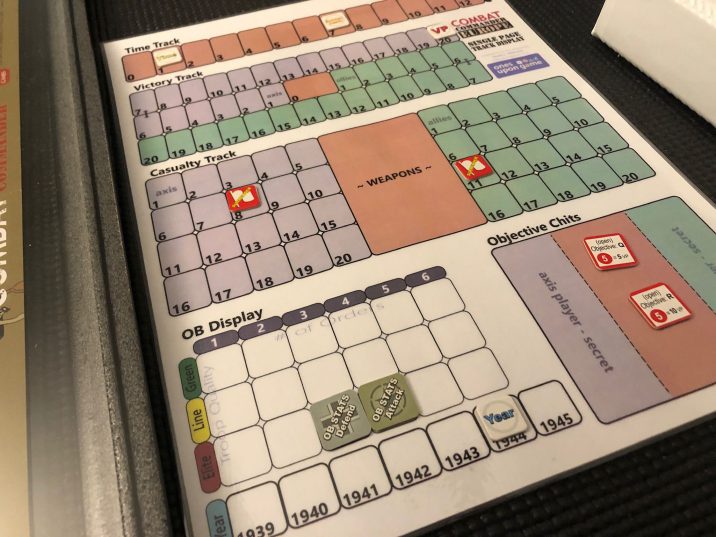 Combat Commander: Europe is of course the best game ever created. Best solo game. Best wargame. Best game period (BGG ratings and tankophiles not withstanding). So I finally broke it out to play again and remembered the one thing (GASP) I didn’t particularly care for and that’s the oversized tracking board. Not a flaw, mind you — the game has none. It’s probably good when playing co-dependently with another player, but for playing solo, I wanted something more compact.

I figured at least half the tracking board was taken up with information on the terrain modifiers and counter layout, so I set out to remove that content and focus on just the tracking tracks of the tracking board. I knew I wouldn’t be happy just scanning the existing tracks and rearranging them, so I just rebuild them from scratch in Photoshop, using the same dimensions for each space, but modifying the overall tracks with some minor adjustments.

Gone are “Player A” and “Player B” as they are replaced with “Axis” and “Allies” labels. I used tan for neutral zones and settled on grey and green for axis and allied areas (to the chagrin of the British, French, Russian, Italian, and Partisan forces, sorry). The flow of the tracks are slightly different (VP track is not a single long row, for example), but still work as designed.

The whole board now fits on a single sheet of 8.5×11″ (US Letter) paper. I printed mine on white cardstock and then heat laminated it. It will go into my scenario notebook in a pocket with the full sized tracking board (might still need it someday).

Not sure if anyone else will find this useful, but all the same it’s available for download (single page track display by ones upon a game).