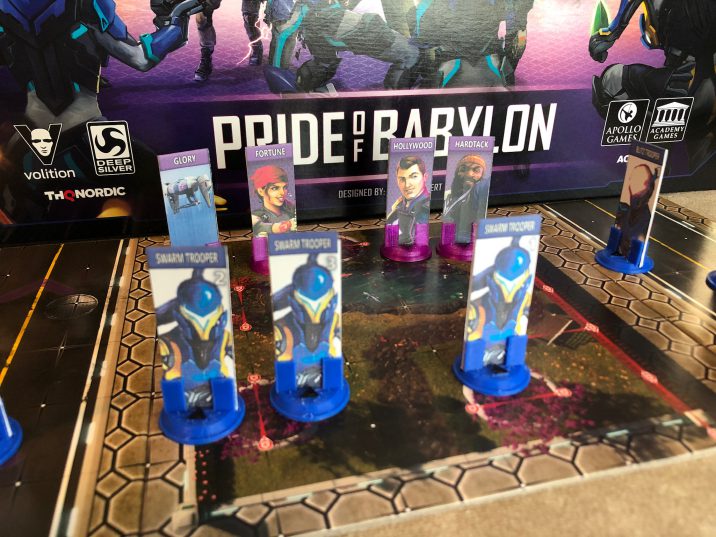 Recently picked up a copy via trade of Academy Games “Agents of Mayhem” Kickstarter pledge with all the expansions (except the terrain and larger tiles options). To be honest, this one was not on my radar knowing early on that the content (based on the videogame) was rated “I” for “Immature”. What looked like a fun boardgame FPS was tainted by profanity and obscene gestures.

Fortunately, enough people voiced valid concern over this that Academy produced a set of “Family Friendly Pack” that replaces all the offensive content (including some that was reasonably tolerable, but parents of kids might object to). Good job Academy! So the first thing I did was set out to find this much needed upgrade to the game. And a BGG user came through for me and sent a copy he wasn’t using gratis. Thank you!

Of course the second necessary step was to remove a “stray bit of flashing” from the Hardtack miniature so that his hand was more of a “fist”. 🙂

Those missions accomplished, it was time to get to the serious work of organizing the game. While early on, it was a difficult process, by the time I got my copy, it was pretty simple with the materials provided by Academy regarding components and storage.

But once again, like most games with a plethora of plastic, I knew that it was not going to be fun playing unpainted. Likewise though, I’ve hung up my brushes for the far foreseeable future. So, as I’ve done with many other games, I set to creating an upgrade set of easy to make standees to make playing a little more fun.

This set covers all the characters from the base game and the released expansions. All 57 of them. The multiplied minions are multiplied here too to the max of the minis included. I added numbers on them to help differentiate when necessary. Download the file and print on five sheets of 110# cardstock. Then score on the fold lines, cut out and glue together.

The standees measure 3/4″ x 2″, so a little taller than most of the minis. You’ll need standee holders too which are readily available and since in AoM facing is relevant, you’ll need something to mark the front of each standee or character as you see fit. I have made some custom designed 3d printed standee holders with raised arrows, so I use those (to be released soon on Thingiverse).

There are standees included for GOLEM, though his base is much larger than the other players, so his miniature might still be necessary. Likewise the Hell Turrets are included, but they could also be used from the box if you wanted.

If nothing else, these will give you a way to play the game while you’re painting you own miniatures if you like. Or if you’re like me, just a better solution overall to the whole miniature madness taking over the boardgame community.

Download the PDF here: AoM Standees by ones upon a game