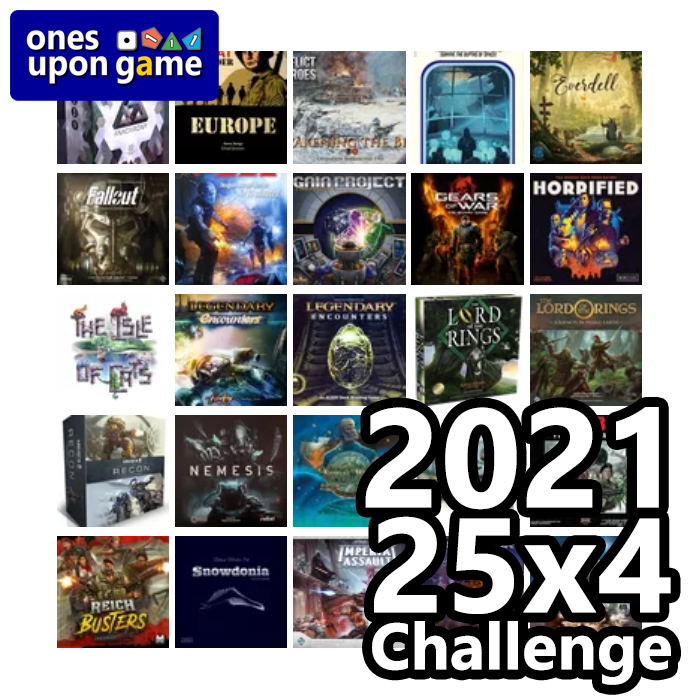 I’ve never been one for annual game play challenges. I felt they were too constraining and I preferred to be free to play what I wanted when I wanted. However, as I look over my collection, which I’ve managed to slow the growth of over the last couple of years, I see way too many games that I “want to play” that someone “never get around to.”. So just like financial management works better with a budget and a plan of attack, I decided that this year I would put myself to the test and do one.

A 10×10 seemed it would get a little boring. There are games, like Lost Cities, that I play on my iPhone that I can play repeatedly (current streak with a fellow gamer is 280 in a row!). I know that playing games more often breed familiarity (sans contempt) and rules memorization. But longer games, solo, can get tiresome.

The next common step is to play 20 games, 5 times each and this is what I nearly settled on. But something about “5” times still felt like some games might overstay their welcome and would be hard to get back out, even for a challenge. But this was a much better solution than a 10×10.

That said, I stretched it just a bit further and have decided on a 25×4 model. I don’t know I’ve seen this before, but I’m sure it’s not that original. 25 games, 4 plays each. Easy. Even some of the longer games (which stretch even longer for me over several evenings), four seemed a doable goal. Especially if I could do them in pairs — two games back to back. Plus I have way too many games to get out and play and this would be a good way to see more of the games in my collection.

So the framework was decided, but what games? I know for sure a hardcore challenge (where you lock in the games and cannot change them) was not going to fly. I know pretty early if I don’t like a game. Likewise, games that I loved before might wear thin with more experienced eyes. So I’m keeping it loose. I’ve a few games on the list that I’ve not yet cracked the seal on, let alone played. So if it turns out to be a chore or a bore, then I reserve the right to remove it from the list. To be honorable, all the previous plays won’t count toward the 100 goal either. I’ve no list of alternates pre-selected to tempt me either. So as trades and other new acquisitions arrived in 2021, they may be slotted in.

* Never before played. May swap out with another title if not to my liking (resetting counter)

If you’re a BGG member and want to follow along with my progress, you can do so on this geeklist.

Otherwise I’ll be posting more detail here after each play or session.