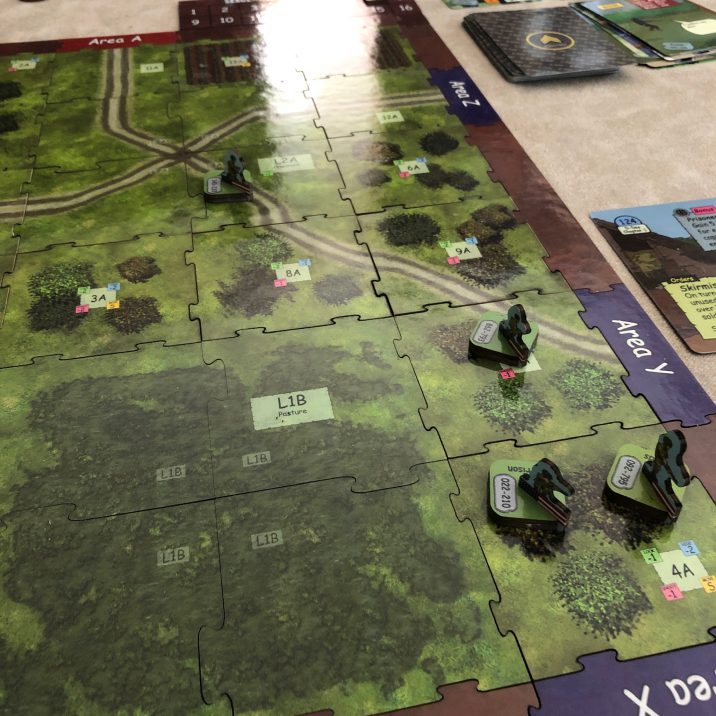 It’s been over 3.5 years since I last played my copy of Lost Battalion Games’ “Sergeants D-Day” (SDD), the younger and far more refined brother of their “Sergeants Miniatures Game: Day of Days” (SMG). While SMG sports pre-painted pewter miniatures (and pre-painted is the ONLY way to provide miniatures), it took up a lot of table space. This is the version I first had and in light of the table hoggedness (and the cost for adding more soldiers), I upgraded my experience to SDD. SDD includes many more soldiers in the starter kit because they are made of laser cut board and assemble together into standees. Both games, apart from some designated “character” soldiers, provide expansions with uniquely named and configured soldiers, making everyone’s copy different from everyone else’s. It’s a very novel marketing strategy, but sadly, one that hinders the ability to use VASSAL to play the game.

So back to the story, I last played SDD back in 2017. But I stumbled across my gameplay explanation video on YouTube (I rarely rewatch my work after editing and releasing), but felt a desire to get it back out again.

I set up the same scenario from before, the first contact scenario #01. The last time the Germans won 35-6 on points after only four round. For the Germans this time, I had five soldiers (two characters and three totaling 12 VPs). The Americans had only four (again, two characters, but as I had no 2 VP soldiers — to add with a 3 — I used the 12 points for an officer and a 5 point recruit). The Germans held the initiative most of the time as well, nine cards to seven. The game ended in the 7th round with the USA blowing away (figuratively literally) the Germans 33-0, eliminating all five of their squad. Neither team could score their objective either. USA captured one Landmark, but needed both and fell one turn shy. The Germans did capture one prisoner, my best officer, but released him so that the lone remaining soldier would be able to attempt to shoot his way out of trouble. Soldiers guarding prisoners cannot shoot. Officer Harrison ran away (per the release rules), but in the next phase joined another officer to re-enter the square and kill the lone German in close combat.

Sergeants is quite the fun game and second only to Combat Commander: Europe as a great narrative generating experience. The events that may unfold via the Story Cards adds to the chaos which wargames so greatly need to keep them interesting. Early on, an old woman came out of her home and yelled at the troops making too much noise, which resulted in all hidden soldiers becoming spotted and eligible targets. Best laid plans and all that.

However, after my hiatus from the game and coming back to it, I fully expected there to be a lot of updates from the company, rules corrections, community supported FAQ, etc… But sadly, I had to muddle my way through rules inconsistencies, a never updated v1.1 rulebook, and apparent disinterest from Lost Battalion Games, in spite of still producing and selling the game, expansions, and extras on their website. It’s not an out of print system, apart from the SDD starter kit being currently unavailable. And unavailable too is the “Learn More” page from, the SDD Starter Sets page (https://lostbattaliongames.com/c-420-SBG-Starter-Sets.aspx).

The rulebook is well written where it’s written, but unfortunately you may be told one thing about movement under the How to Move section, but something else important is discussed in the beginning in the Mapboard or Terrain section. I understand to some degree. As a software developer, don’t expect me to write a great manual for my products. Likewise game designers cannot all be the late Chad Jensen and write the world’s best gaming rulebook ever. But the complete dearth of support does not bode well for such a great system (SMG or SDD) getting more exposure and growing the fan base. The most recent question over on (that other site) about some basic rules has been left unanswered for over eight months (since asked July 3, 2020). You’d think at the very least someone from LBG would have ventured to check on their game in eight months.

Designer Jeff Billings has not answered a post on the SDD forums since April 11, 2016. Nearly five years! The SMG forum is not much better. He last replied to a question June 13, 2016. He did however stop by in June of 2019 to promote their Kickstarter for a deck of playing cards with the SMG/SDD artwork to commemorate the 75th Anniversary of D-Day (I did back it and have my set of cards, still sealed).

The miniatures game does fare better and gets more interaction. SMG has been expanded with vehicles, terrain pieces, etc… so it’s more “sexy” as it were. So there are more questions (and answers) and general discussion on that forum. Since the games, in general, are very similar, I was able to deduce a few answers for SDD from the SMG discussions, so there was that. But even so, the last activity in those forums was four months ago.

I get it, games die. Interest wanes. But usually it’s for a game that’s no longer available. And typically ones that weren’t that good to begin with either.

So the point of this post? I dunno. Perhaps LBG is done and no longer interested in producing games. Perhaps not. I’d love to see more content for Sergeants down the road. It really is a clever and well-designed game. Just one that’s poorly documented and never seemed, I suppose, to catch on enough to be a great success. Perhaps discussing it here will spark some interest and revive the game? I doubt it.

But if you never heard of it before… now you have. Hopefully you can play it sometime.