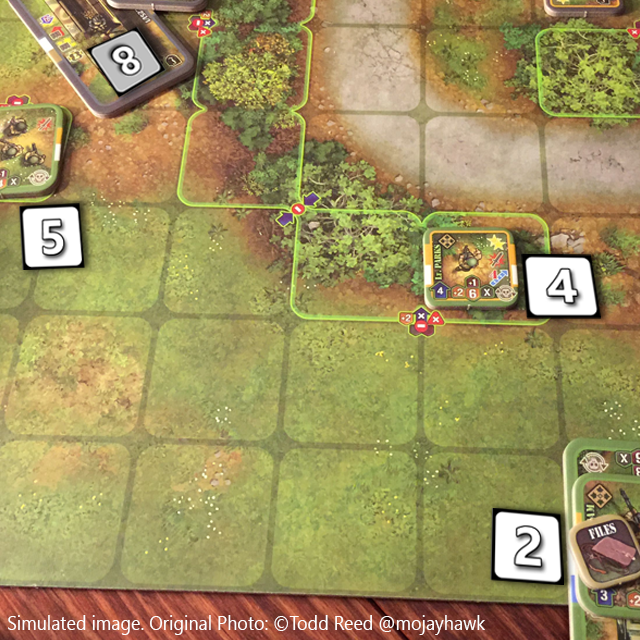 On the post Heroes of Normandie Going Solo! I mentioned my Chit Pull system I used previously to play the game solo, to which I was asked:

Is your modified chit pull system available? I’m very interested in this game, and I would love to know different [approaches] to soloplay it

Well, Guillermo, since “Guillermo” was my in-class name for two years of high school Spanish (I guess “Kevin” gets lost in translation and I refused to be called “Cocina”), I found them and am happy to make that available here.

NOTE: I have many files and game mods that I made and previously made available on BoardGameGulag over the years. I plan to release the still relevant ones here as time goes by. The Downloads page will be the place to find all of these in one location.

While I created this specifically (back in 2014!) for Heroes of Normandie, they really can be used for any game where you’re playing both sides and want to introduce a little unpredictability.

So first, the file.

It’s a simple sheet of 72 counters, 2 sets of 1-18 for each side. There is a white and a light-grey set. One set for each side is marked “D” and these (as many as are in play) are meant to go into the draw cup. The others are placed one or near units on the board. DOWNLOAD HERE. (you may redirect folks to this post or directly to this file, but please do not post this file itself on other sites without permission)

You can print these on simple cardstock and cut out or print on a label sheet or paper and glue to a thick piece of chipboard, then cut out.

Here’s how I used them specifically for Heroes of Normandie. As I recall, each side has a certain number of orders they are allowed to issue along with a certain number of “dummy” orders. Those order tiles are assigned face-down to units so that the opposing player know which units MIGHT be acting in a given turn, but unsure which will for sure.

For the solo player, there is no mystery involved. So some of the fun is lost. However, what I did with these chits was to assign 1-x chits to units on the board that I WANT to take an action AND put the corresponding “D” numbers into the draw cup. The “x” is calculated as follows:

The “one extra” adds even a little more chaos to your plans (since you’re playing both sides you cannot have perfect information for each side that is normally hidden.

Since Heroes operates on an I-Go-You-Go alternating system, you can use two draw cups for each side and then let the side with initiative draw first and then alternate cups. However, I preferred to keep things really variable and put the draw counters for both sides into a single cup and let the “chits fall where they may” until the number of orders for a given side were spent. This way one side could have more than a single turn in a row. The dummies and extra counters function as hindrances to getting the exact units you want to take actions. When both sides have used up all their orders, then the other units can simply be activated for their basic movement orders as normal.

One thing I believe I did as well was allow each side one “gimme” per round. In other words to keep it from being totally random and not using a unit that you know you would have definitely (that perfect timing fire order, etc…), then if that side’s chit is drawn, you can, once per round, declare that one of your assigned but as yet unused units is the current unit. Pull their chit from the cup and return the drawn chit back and then take the action normally for the gimme unit.

To insure initiative is kept while using the combined draw cup method (this is not necessary if you’re using separate cups for each chit pull pool), only put the chits into the cup for the side with initiative and draw the first chit before putting the other side’s chits in. Alternatively you can combine them all and then draw until you get a chit for the side with initiative, then return all the other drawn chits to the cup. After that, then the chits play as they are drawn as normal.

Finally with the cards, I handle these like I do with other games with card-based bonuses or actions. No hands. Draw two per turn or round (as you see fit), Use one if you like and discard the rest (so you carry no cards over to the next turn or round). For Heroes if you do it once per round, you can choose when you want to try to use a card, draw three and discard any (1-3) unused. My memory on these cards may be a little foggy, but you get the general idea. No carrying over of cards, keeping what choices you have as your opponent a mystery to both of yourselves. 🙂

Hopefully you will find this adds as much fun to playing Heroes of Normandie solo as I did. If you do, or if you adapt these to other games, please share in the comments below!