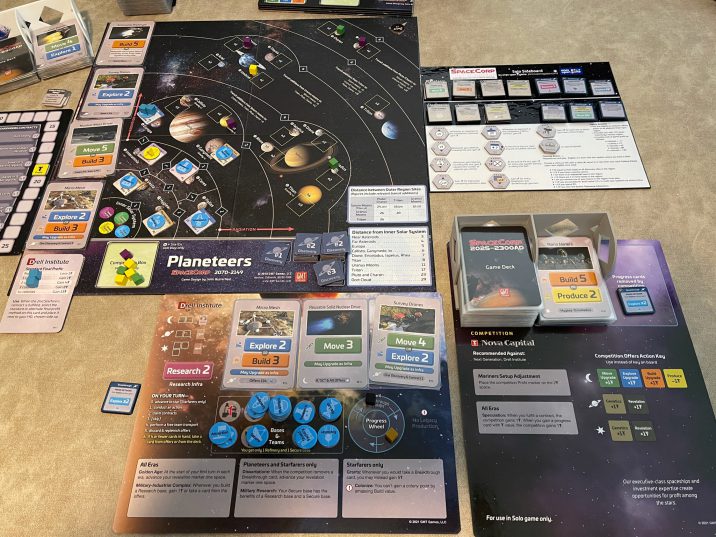 Since receiving the newly released SpaceCorp: Ventures expansion for SpaceCorp, I’ve been enjoying this game again. Turns out my first play victory was just a fluke. Played the base game again (prior to unboxing Ventures) and was soundly stomped by the “Competition” (AI). I think I lost focus and was trying to “do all the things” and not prioritizing stopping the Competition from scoring and scoring for myself as much and as fast as I could. But it will still a fun game and tight until the last era, when I was steamrolled completely. Even found out after I’d misplayed the AI (to my advantage) and was still slaughtered. Happy to say that my current game, using the new asymmetric corporation boards, is going much faster and still a very close affair. But we’re about to move into the Starfarers era and who knows what will happen.

As an aside, as is the case with most great AI, I was poised to end the Planeteers era many turns before, but the AI ruined it. I’d have placed a base on Callisto on my next turn and it would have been my fourth base with life/water and my third in the Jupiter region, closing two 5T contracts (neither had been claimed in the Mariners era). But nope… the darn AI targeted the site by lowest/highest number or some nonsense, jumped my claim on the discovery tile and left my team stranded until I could get them back! Awesome!

So anyway, one of the things that did bug me about SpaceCorp in general was that when you enter the second era, the board expands to two boards and doubles the amount of table space. You have everything all nice and in place and then it’s time to redecorate the table. Fortunately the boards aren’t too big in and of themselves, but still figured something could be done about it.

Since the sideboard is only a placeholder for the progress cards for the last two eras as well as for the colonies (oooh, colonization bad! <eyeroll>) needed for the final era, I figured it would be easy enough to come up with an alternate board for solo play and thus keep the required table space down just a bit. I scanned the cards needed for solo as well as a board image of the colony area (thank you Vassal module) and set to work.

What I came up with was a smaller (about 9×8″) sideboard that contains slots for all the progress cards counters (see below) and the 10 colony slots for the 11 colony markers needed in the solo game. I retyped some of the colony instructions to adjust the layout a little better. For the progress counters, I used the scanned card images, cut out the main area and squared them off to just slightly larger than 1″. I faded them for the slots on the sideboard (like the real thing) and then kept as needed one set with T bonus and one set without.

For me crafting these for use involved printing both sheets on this high quality label paper (highly recommended!) that is for inkjet/laser and gives great clarity and won’t tear or smudge. I trimmed the board graphic (close but not final) then adhered to this smooth chipboard (on the white side) and then cut down to exact size with a utility blade and metal rule as a guide. A quick edging with black dry erase marker and voila! the board was complete. Note: I find that trimming the label close to size, but not completely at first gives me a little more margin of error when aligning on the chipboard.

A simpler alternative would be to simply print the board on cardstock or on regular paper and laminate then cut to size.

For the counters themselves, I manually cut them out with scissors (they take only 1/2 a sheet, so the other half is preserved for some future use) and then adhered them to some large black plastic counters I’d 3D-printed in the past. However, if I’d not had the counters already printed, I’d have stuck the sheet to some black mat board or even a piece of the chipboard and then trimmed them also with a utility knife.

In the end, I now have a solo play sideboard that does all the work of the larger version in much less space. Hope you find this useful or found some inspiration to jazz up your own games with custom upgrades and modifications.

If you want to use this yourself, the files are available for free download. Feel free to link to this post or the files directly, but do not upload them elsewhere.