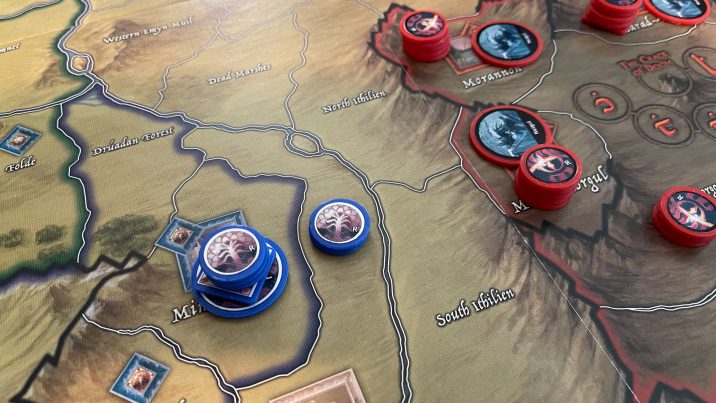 For me, this has been a project long planned and long overdue… and finally I’ve completed it and am ready to get started again on War of the Ring (Second Edition) from Ares Games and designers Roberto Di Meglio, Marco Maggi, and Francesco Nepitello. This version also includes the gorgeous and subtle art by John Howe, who is a long-time illustrator of Middle Earth (though I am a bit of a fan of the Brothers Hildebrandt bright and vibrant treatment as well).

Nevertheless I played this many years ago using a solo variant for the Shadow player. I was less patient back then so given the length of the game, I felt it was better moved along to another gamer. Plus it was then (as now) out of print so I was able to sell it for a reasonable price and that tipped my hand. But then it came back in stock and I’d changed my focus a little more so I grabbed a copy on Amazon.

And of course, they packed it poorly. And it was damaged. But I couldn’t return it except for refund and I wanted it, so I kept it and the damage is still there and annoys me every time I see it. Yes yes yes… let it go.

So anyway, I had seen where others had upgraded the miniatures to counters and to me, this not only suited the wargame that this is, but also would, as usual, make the game much easier to play. From my previous play the miniatures cluttered up the board quite a bit and without being painted were not readily distinct from each other at a quick glance. So I pondered on this upgrade for some time and how best to handle it.

First thought was to cut wood dowels of various sizes to represent the different levels of figures (Regular, Elite, and Leaders/Characters). I’d dye the dowels in stain first to give them a base blue or red color (to help keep the opposing sides different from each other, but similar for the same side). Then slice and adhere decals. But I feared without sanding the cut edges would be too rough and not handle the stickers well.

My next idea was to use Fimo clay of various colors to represent each faction, then try to maintain a cohesive red/blue distinction as well. But pricing out the clay seemed overkill and I didn’t trust my sculpting ability to make eyes (Sauron) and hands (Saruman), etc to look good at such small scale. And such counters would not stack very well, something I wanted to make sure would happen.

So I tabled this idea for awhile until working on a different project (non-gaming) I figured out that 3d printing doesn’t need to just be for big models or projects. Using a 3d printer to make simple but functional components from plastic: meeples, cubes, tokens… or counters! I had acquired all the expansions already as well so I did an inventory of all the characters and armies and levels and created very simple 2mm thick counters in circle, square, and hexagonal shapes. As I use a heated glass bed, the bottom of each print melts very smooth, so for those layers I used a concentric setting for visual appeal. I printed these at .40mm layer height, so it was only 5 layers to print for each one. A large set of counters could be printed in a few hours.

(TIP: This is also a great way to use up the last filament on a spool too and then just keep the counters around for a later project!)

For the regulars, I used a simple 3/4″ circle shape, the Elites a 3/4″ square, and the leaders 1 1/4″ circle (for the expansion mini-factions like Ents, I used small hexagonal counters to make them stand out). I chose these because I would design the stickers to accommodate my Fiskars Small Circle Punch (0.6″ circle) and my Ek Tools 1″ Circle Punch. For the square stickers, I’d just cut them with scissors. The stickers I designed using the symbols for each faction from the game as well as the character cards for the named characters. I printed them out on these labels and then began the process of punching them. I will note that these labels are thick and great quality, but a bit finicky with the punches. I had to punch some holes with sandpaper from time to time to keep the blades sharpened. In addition, I also had to align the image in the punch, hold it firmly, then set it on the table and hammer the lever down to get a good clean punch. It took some effort, but I would not be defeated!

And I think the end result, while not perfect (due to punching issues), speaks for itself. I now can focus on playing this great now-classic wargame with proper counters that are easy to sort, distinguish, and move about the board.

The stickers are free to download for you to make yourself on whatever medium you like. You could even just stick them to mat board and cut into squares for ease.