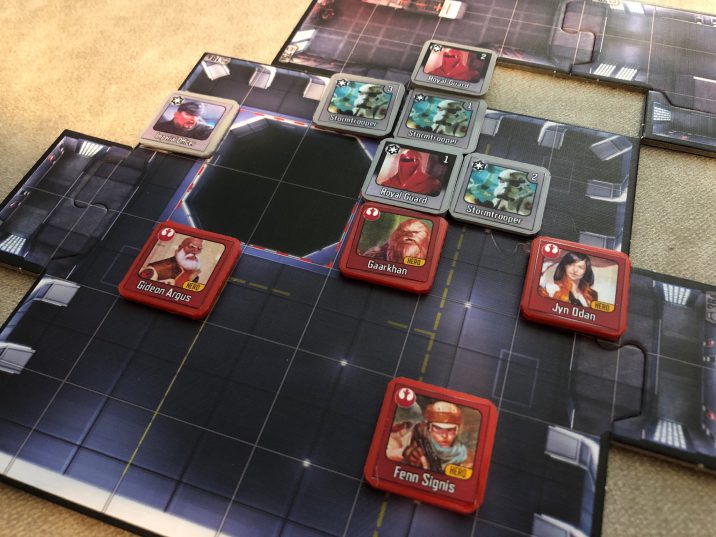 Last year sometime — can I even remember last year? was there a last year? — I created the following upgrades for Star Wars Imperial Assault by Fantasy Flight Games.

Now I know some of you will balk at replacing miniatures with counters and that’s fine. A lot of you have a lot more time to paint all the minis that seem to be coming with every game these days. But for me, while I did tackle many of the SWIA miniatures with my l33t painting skilz, I finally had enough and just wanted to play the game. And since it’s really a tactical board wargame (not a true “miniatures” game) the minis didn’t really add all that much to the immersion. So with the help of Photoshop and data merge, I created the following stickers that can be used to create your own counters.

I printed these on my favorite ink jet label paper (currently unavailable! these look like a good alternative) and then cut them out and applied to the counters. I printed 3D counters in various sizes to fit the game board, mostly 1 inch square, but many others are 2×2, 2×3 and others. I used red plastic for the Rebellion and mostly grey and some black for the Imperials side. Scum and villainy for both sides used the core sides color. However the faction color is on the stickers (bottom half) as well, so that you can simply adhere to some good chipboard and cut them out for cardboard counters.

The stickers themselves are color coded (top half of the sticker) as well for the various groupings you can and will need and for an added bonus, they are numbered within each group (1-2, 1-3, etc.) to track each one separately. I chose the colors grey, black, and blue and this doesn’t coordinate 1:1 with the Legends app, so you may need to use some marker on the group card to remind which group it which. However, I had no issues playing with them as well.

In addition to facilitate tracking statuses and wounds to each figure in a group, I devised these 3d printed card holders with slots to place the tokens for each numbered unit. You can download these from Thingiverse for free and then print them yourself or order a set for a nominal fee from an online provider like Treatstock.

So now, when I want to play SWIA, I can just pull out my box of counters and setup and have no confusion over which group is which and which character (especially heroes) is this one or the other.