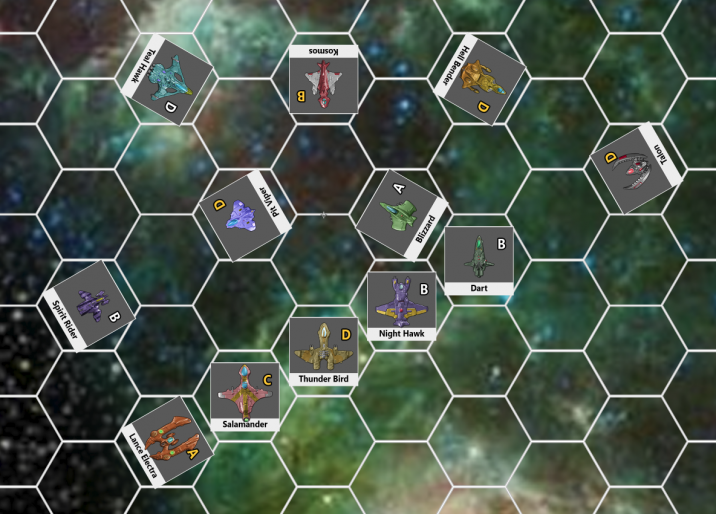 A few years ago, I released on Board Game Gulag a set of counters to replace the base game minis for the ship combat game Silent Death: The Next Millennium Deluxe Edition by Iron Crown Enterprises. I went into great detail how I photographed each ship model against a ‘green screen’ of cardstock and then digitally painted each image. But that post is “gone with the purge” on BGG and all those details are lost.

But the good news is that the counters themselves are not, so without further ado (before we say adieu), I present them here for all to enjoy.

This includes 24 sets for each of the 12 ships in the game. Their are 4 ships per set and two sets (white and gold) for each ship type lettered A-D. I think I did this to allow for each side to use the same ships perhaps, but that was written awhile back. There are also counters for the various missiles and rockets, etc…

To make the counters, print the sheets out on paper or better full sheet stickers and adhere to some chipboard or mat board, then cut out the counters and play!

Also available is a custom hex grid starfield map to be able to play Silent Death on a smaller table setup using this counters. While the ship models are of varying sizes, the counters themselves are not so they work in a smaller space like this. There are two map files, cleverly named Starfield Map A and Starfield Map B. Put them together and voila, map board.

The rulebook for Silent Death is available on DrivethruRPG for $9.00 and per that listing “you will need to acquire the hex maps, miniatures, and dice to play.” So here are the maps and miniature proxies… I think you can scare up a few dice yourself.

Perhaps this will inspire someone to make more counters for different ships as well?